The cosmetics directive provides the regulatory framework for the phasing out of animal testing for cosmetics purposes.

History of the ban

Review of the 2013 implementation deadline of the marketing ban

According to article 4a (2.3) of the cosmetics directive, the European Commission was required to analyse whether one or more of the complex tests covered by the 2013 marketing ban would not be developed and validated before 11 March 2013 for technical reasons. In the case that alternative methods would not be made available, the Commission had to assess whether to make a legislative proposal in relation to the 2013 marketing ban.

Second, the Commission carried out an impact assessment to assess whether to make a legislative proposal given that the full replacement of animal tests by alternatives was not yet possible. A targeted stakeholder consultation was carried out between 7 December 2010 and 15 April 2011.

On 11 March 2013, the Commission finalised the review process by adopting a Communication on the animal testing and marketing ban and the state of play of alternative methods in cosmetics. This communication confirmed the Commission’s commitment to maintaining the 2013 deadline and outlines how it intended to further support research and innovation in the area while promoting animal welfare worldwide. In addition, the EURL-CVAM technical report 2013 provides a more detailed overview of progress made in the development, validation, and regulatory acceptance of alternatives.

The adoption of the Commission Communication was announced in a press release and additional background information was provided in a questions and answers document.

The communication was accompanied by an impact assessment consisting of 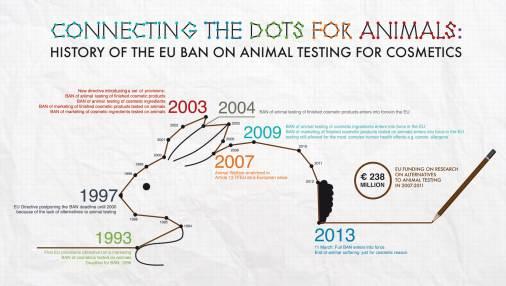 European Centre for the Validation of Alternative Methods

The European centre for the validation of alternative methods (ECVAM) plays a key role in the development, validation, and international recognition of alternative methods which reduce, refine, or replace the use of animals in testing. It is hosted by the Joint Research Centre's institute for health and consumer protection (IHCP) located in Ispra, Italy. Since 2011, ECVAM has become the European Union reference laboratory for alternatives to animal testing (EURL ECVAM), established under Directive 2010/63/EC on the protection of animals used for scientific purposes.

The SEURAT project is a joined research project between the Commission and the cosmetics industry.

The European partnership for alternative approaches to animal testing (EPAA) is a joint initiative between the Commission, European trade associations from 7 industry sectors, and individual companies. It was launched in November 2005 to promote the development and implementation of new 3Rs methods (replace, reduce, refine) and modern alternative approaches in safety testing.

Alternative methods to animal testing are one of the focuses of the 'international cooperation on cosmetics regulation' (ICCR).